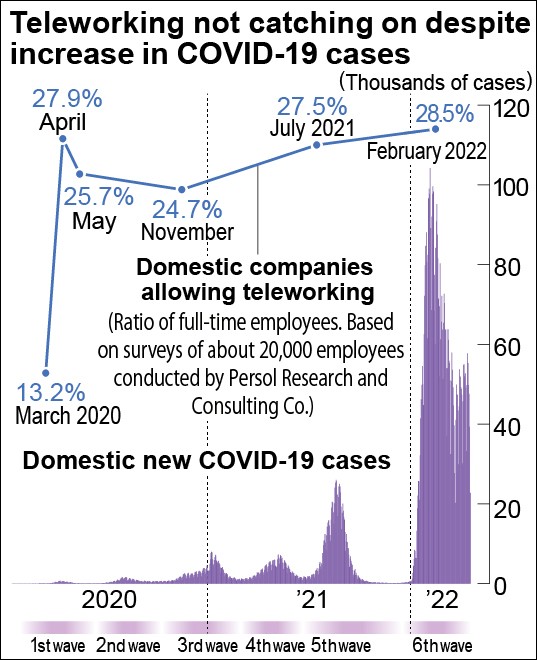 Businesses and employees differ widely in their views on telework

Surveys show a wide rift has opened up between employees and management at Japanese companies in their attitudes towards teleworking amid the pandemic.

The discrepancy comes despite the Japanese government’s continued promotion of teleworking as a key way to reduce COVID-19 cases.

And researchers warn that companies may come under increasing pressure to accommodate employees’ strong desire for the ability to work from home.

The survey shows that a large majority of those working from home want to continue doing so, but businesses remain lukewarm on teleworking – particularly as there is no state of emergency over the novel coronavirus and measures have been lifted prior to the emergency .

Company officials told pollsters that teleworking comes with several downsides. For example, it can complicate employee communication and make it difficult to assess work progress from home.

Since March 2020, Persol Research and Consulting Co. has been conducting regular national surveys of approximately 20,000 workers on the transition to teleworking.

It found that as the pandemic progressed, the number of workers surveyed doing telework increased as the COVID-19 situation worsened, but then stagnated once it reached about a third.

The company’s initial survey found just 13.2 percent of respondents were working from home, but after the first state of emergency was declared in April 2020, that number more than doubled to 27.9 percent.

Since then the number has been hovering around this point. In a study conducted in February, when there were more than 100,000 daily cases of COVID-19, the number was still 28.5 percent.

Teikoku Database Ltd. conducted its own study of about 1,800 companies in February and found that 31.5 percent had adopted remote working. But of that number, 52.1 percent of companies also said they’d found many downsides to teleworking.

Yuji Kobayashi, a senior researcher at Persol, said companies whose performance has suffered from the novel coronavirus pandemic may blame telecommuting for the drop in productivity.

The February survey found that about 80 percent of employees want to continue working from home.

“It’s very likely that those who have telecommuting experience will ask for an environment where they can work from home,” Kobayashi said. “Corporate response will become even more important going forward.”

For some employees, the difference is big enough to convince them to look elsewhere for work.

One IT engineer said she was considering finding a new job because her current employer has urged workers to return to their assigned jobs once pre-emergency measures are lifted.

“During the pandemic, I got a stronger feeling that the way I work is much more important than the money,” said the 27-year-old.

While working for a Tokyo based company, her job involves setting up computer systems mainly for financial institutions.

Whether she can telecommute or not depends on the needs of these financial companies.

In spring 2020, when the first wave of COVID-19 cases hit Japan, the company she happened to be assigned to said it had failed to create an environment that would allow her to work from home.

She finally started teleworking in December 2020. After adjusting to working from her home in Chiba Prefecture, the woman found the three-hour round trip to her assigned company unbearable.

She asked her manager in late March to assign her to a company that would allow her to work from home, but her request was essentially ignored. The woman now searches the internet for job offers that allow for full-time teleworking.

She said she intends to move into another venture next winter.